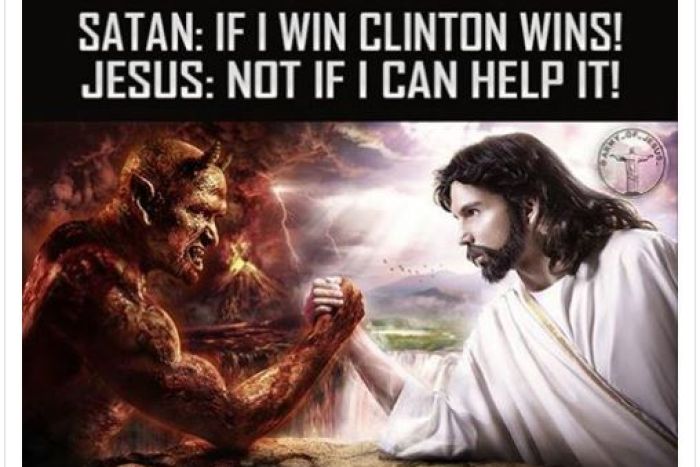 It is a weird time in the world.

That weirdness tends to flow from one Donald J. Trump, who is somehow the president of the United States.

By now every sentient being in the world, except Trump, acknowledges that the Russian Government was behind a carefully coordinated effort to tilt the election in Trump’s favour. Not just using state-run propaganda like RT or Sputnik, but also by funding a legion of “troll farms” that pumped out content designed to motivate Trump voters as well as The Russians targeted people on the left and right extremes of the political spectrum as well as Black Lives Matter, Muslims, LGTBQ people and gun owners.

It’s now clear that the Russians understood the power of the information war, while most Americans had no idea it was even going on.

Some of these Facebook ads were released yesterday. It poses a serious question: did this actually work? Were people really motivated by these ads?

They are poorly written and designed, like so much stuff on the web, but I would argue that they were and are effective for two reasons: community and context.

Who belongs to your community?

Everyone is part of one. It’s about much more than the place where you live. It’s really about a “community of interest” – built around the things you care about and believe in.

That’s because the web eliminates distance, allowing us to communicate with like-minded people no matter where they live. It lets us become part of a community.

What was most insidious about the Russian information warfare campaign was its targeting of communities of interest in ways to further exacerbate the divisions that already exist in American culture.

The Russians exploited this reality.

Look at this ad that suggests, quite literally, that Hillary Clinton is in league with Satan. This isn’t meant as a metaphor: the ad is saying (in convoluted language) that Clinton and the devil are close pals and work colleagues. Most people would find the idea ludicrous. But if you are part of a community of interest built around evangelical Christian beliefs and extreme right wing politics, it might resonate with you.

That’s because it fits within your context.

If Hillary Clinton is in league with the devil then it makes it easier for evangelical Christians to vote for a thrice-married secular man repeatedly accused of sexual assault.

Humans aren’t the rational, cerebral species we like to pretend we are.

Rather we are ruled by emotional response, a response that instantly flows from years of contextual influence.

Why do we believe the things we do? Because we have been trained to – by parents, churches, schools, media and more. We assemble those influences into something we describe as a worldview.

That worldview is often encapsulated in shorthand descriptions of types of personas that veer from accurate to oversimplified to offensive – yuppies, granolas, technocrats, hillbillies, white trash, bible thumpers and so forth.

We interpret the messages that are sent to us through the filter of context.

So while a message labelling Hillary Clinton the antichrist will ring hollow with an atheist, it will effectively reach people who have strong evangelical views matched with right wing politics, particularly if these views include a “traditional” view of women’s roles in the world. Hillary Clinton, of course, means something to everyone. She’s a perfect study in context – everything gets amplified by her years in public life and the remarkable and sustained attacks she has faced for being a groundbreaking woman.

The Russians appear to have targeted these ads to reach specific communities of interest in states most “in play” politically. So the “Satan” ads would not have reached people who didn’t hold the views that ensured the message was interpreted in ways the Russians wanted.

It’s what makes social media advertising such a powerful tool for marketers, and such a dangerous one for information wars.

Targeting allows us to take advantage of context to ensure our message is received.

Target people who are fans of conspiracy theorist Alex Jones’ Infowars or the New Yorker and you will begin your communication with very different contexts, and the messages you are sending will be received and decoded differently.

Wait, Don’t You Write About Marketing?

This is a marketing blog, right? So why am I writing about Trump and the Russians?

Partly because everything seems to be about Trump and the Russians these days. But more importantly, it’s because community and context are valuable concepts for anyone attempting to sell a product or advance a cause.

Too often businesses assume their audience is the “general public” when we know there is no such thing. It’s lazy thinking, and worse marketing.

The importance of communities of interest and context is only growing as interconnected communication technology becomes more entrenched in our lives. With Augmented Reality on the horizon as a social and cultural influence, we know our diverse realities are only going to become more important – to everyone from marketers to presidential candidates.

So as you plan your marketing campaigns, consider who you are reaching and what communities of interest they belong to, as well as the context through which they will receive and decode your message.