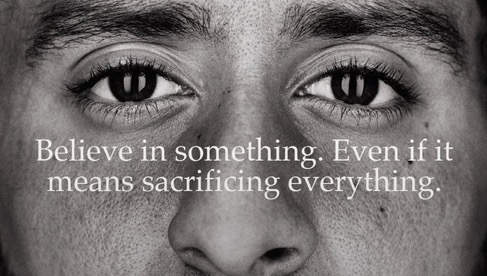 In the United States, everything is political.

By making former NFL quarterback Colin Kaepernick the face of the 30th anniversary “Just Do It” campaign, Nike picked its tribe.

Kaepernick, as you know, famously “took a knee” during the US national anthem in protest of the treatment of African Americans by police. That helped fuel the discussion about the #BlackLivesMatter movement.

Trump, of course, took issue with NFL players taking a knee during the anthem and used the issue to fire up his rabid base of supporters. He said they were anti-American, disrespecting the troops and the flag.

That wasn’t true, but Trump never lets facts get in the way of an angry, racist tirade. So, the culture wars came to the NFL. Kaepernick became toxic and, despite being a solid starting NFL quarterback, no other teams picked him up. A collusion case against the NFL is currently pending and has moved into the hearing stage.

He’s languished on the sidelines, a martyr to his cause, a modern-day Mohammad Ali. Then Nike dropped the bomb that Kaepernick would be the face of its iconic campaign. The results were as immediate as they were predictable. Twitter erupted with photos and videos of rednecks burning their Nike gear in protest. One gentleman took a photo of him giving the finger to a Nike hat in his closet. Stay classy, Trumpers.

Nike is a cultural movement as much as it is a sneaker and apparel company. “Just Do It” has become part of our culture, fueled by decades of smart marketing led by its agency Wieden + Kennedy. It’s made the connection between superstars like LeBron James and the kid missing a shot in his middle school gym – we’re all the same. We can all be stars if we just do it. Take your shot.

But why would a company that makes billions every year want to alienate part of its customer base? Because Nike wants to stand for something.

By making Kaepernick the face of their campaign, they are saying that they stand with people who value tolerance, who respect differences, who are kind, who are not going to just “shut up and dribble.”  That’s their tribe.

It’s a smart business decision. Younger people disproportionately hate Trump – the kids are alright. And younger people are much more inclusive than older Americans. Nike is marketing to its future customers, not just its current ones.

Cynics will attack Nike for this, but we should also consider the possibility that this isn’t simply a raw business decision. Maybe the leadership at Nike actually believes in what Kaepernick represents. Maybe their employees do too.

The lesson here for other businesses is that it’s ok to take a stand. Pick your tribe and serve them. Stand for something.